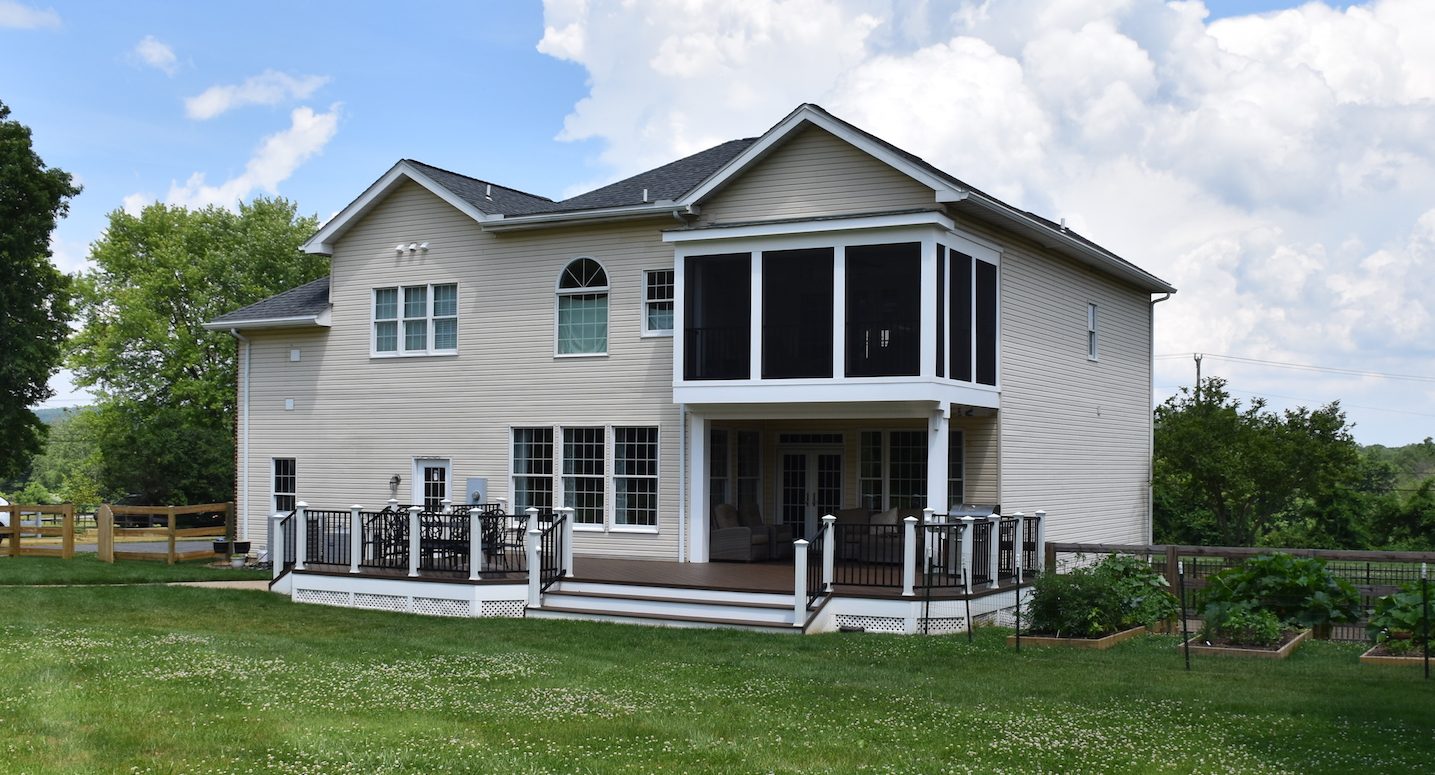 Screened In With Lower Deck

The family bought a home in Round Hill, Va with an existing two story deck that butted up against a dugout patio, three stories below. The couple did not use the outdoor space because of how rickety and unsafe the upper and lower deck felt.

The couple has four children, one of whom was getting married at the end of the summer. The wife wanted to update their outdoor space in order to hold an outdoor reception at their home. She also wanted to update the space for potential future events like more weddings, graduation parties and the addition of grandchildren. She really wanted an area where she could feel comfortable gathering her growing family over the coming years. Goals: Safety, Enhance the View, Improve Functionality

Their main goal in rebuilding was to mitigate safety concerns, improve the view, and to maximize the functionality of their outdoor space. As a mother and future grandmother the wife had some major safety concerns about the way the two story deck interacted with the patio off of the basement. She was concerned that small children could fall and get seriously injured. She wanted a space where she could let children play outside without worrying about serious injury. The wife also had a dream of a space where she could hold events like her daughter’s wedding reception and gather in general. She enjoys entertaining and hosting events.

The father and future grandfather had problems with the supporting beams of the deck and how the upper deck posts impedied the gorgeous view of the property. He fell in love with the property and wanted a space that enhanced the view and allowed him and his family to enjoy their beautiful property. He also wanted to create a private space on the upper deck where he and his wife could enjoy the serene view together. (the upper deck is off of their master bedroom).

The couple also had several problems with how the deck functioned overall. The space was not conducive to the furniture the couple wanted to put on it. There was no good space for a couch, a dining table or a grill. There was also no area to put a serving table in the event of a gathering.

When initially meeting with LD&F the couple decided to build the project in phases, starting with the lower level deck due to cost. LD&F was able to walk through the design process to improve visibility, improve safety and create spaces for all of their desired furniture. LD&F provided the customer with a 3D design that allowed the couple to see how they planned to achieve their goals.

LD&F was able to come up with a few solutions to solve safety concerns.

There were a few ways LD&F improved the visibility.

All three of these strategies helped to improve their visibility off of the deck and opened up the space to their gorgeous view.

LD&F improved the functionality of the space by.. 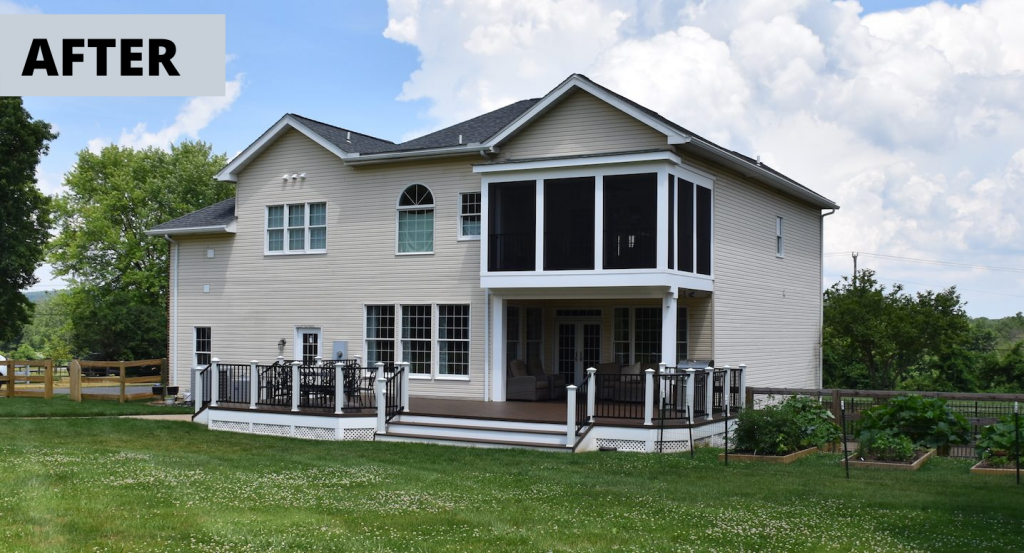 At the conclusion of the project the couple had two new transformed spaces that went from being a visual obstruction full of safety concerns to a place that felt safe, secure and a gathering hub for their entire family. The couple stated that “the deck was the highest quality deck that they had ever been on ”. They both love the new space. The wife especially loves the gathering area that the new space has created for her family. The screened in porch off of the master bedroom has become a favorite spot of hers and adds extreme value to their home. She commented at the conclusion of the project that  “the screened in deck is now her favorite place in her home.” The father/husband loves the view off of the new screened in and lower deck. He can often be found relaxing outside and enjoying the gorgeous view.

The couple was able to hold their daughters wedding reception successfully on the new deck with great feedback. Their sister in law, who was visiting, commented that she wanted “whatever this was built with, used on her deck” back in Pennsylvania. The customer commented that the new space was perfect for the wedding. They were able to serve food, create a great gathering space and display decorations for the event.

The customer has since been able to hold barbeques, family events, graduation parties and anything else you can think of. Through this process the customer gained safety, functionality and is now able to enjoy the beautiful view. Their space now feels luxurious and is one of their families favorite places to congregate. They are extremely happy with how much time and effort was put into planning. They both felt that their experience balanced their expectations and their budget well.